As the series progresses this page will feature race results and championship standings.

All participating clubs are request to submit either excel format results or Lapmaster results so we can make the results process efficient.

All results should be emailed to abslotsport@btinternet.com as a digital file either from lapmaster or an excel file for inclusion in the championship stats.

You will also find downloadable file for A4 ands A3 posters and Race rules in Jpeg and PDF format. 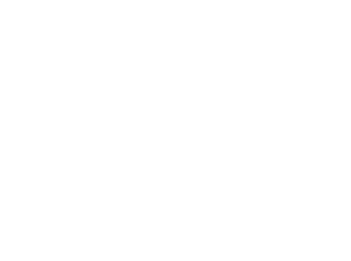 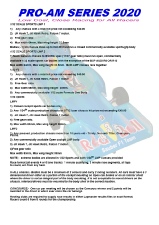 Sunday 2nd February 2020, and a new dawn for Pro Am racing, with 8 rounds and new body regs for both the 1/32nd sports and 1/24th sports, who would be the first to take the spoils?

Round one was held at Skyline raceway in Rayleigh( big thank you to Ron for hosting us).

It was very good to see David Ensor and Nick Cunningham rejoin the series, along with Brian Saunders and Steve Kearey.

First event was best presented, and that was won by Ron with his nicely painted Mack Zytek LMP 1/32nd body, which scored him 2 extra points , well done Ron.

First on track action was qualifying for the 1/32ndLMP 1& 2 class cars, and the real shock came when multiple BOC winner Josh Bryant did not get his LMP 1 car into the A final! Would he make it onto the podium? Time would tell?

Josh set about winning the B final, with a very good score that would give the A finalists something to worry about, and indeed only Richard Mack and Ron Liddell managed to beat him , making this the top 3 overall.

David Ensor took the lmp 1Am win and Colin Wilkinson the lmp 2 Am win.

On to f2, and no qualifying for this, straight in and it was going yo be the case of who could stop Josh Bryant?

After his recent BOC win in f1, it seemed anything with open wheels and he was the man!

The first of the finals saw a bit of a bruising affair, with Keith Gibson coming out on top with a good drive, but in the A final not even the efforts of Richard and Ron could stop Josh taking another win( even with a badly bent car).

And so to the 1/24th sports class, and everybody chose to race in lmp1, so closed cockpit prototypes on modern chassis.

The B final proved to be more bruising than the f2 B final, with one of the funniest incidents involving Brian Saunders throwing Pete Kerr's car into the air, said car hitting the ceiling and landing back on track in a pile of paint flakes!

Neverless, Colin Wilkinson came through and won, and in doing so would win the Am catergory, but how high up the leader board would he end up?

The A final had all the days ' Superstars' in it, and on paper it should have been a straight fight between ' The home team' and Josh with Stan Alton in the mix( after a very good qualy run), but what happened was a real shock!

Yours truly had qualified 6 and did not think for on moment had a winning car under me!

But as it turned out, car was superb across all 6 lanes and ended up taking the win from Richard Mack, and Josh Bryant( both in gt12 cars).

So a good fun day was had by all, and a good start to this years series.

Many thanks again to all at Skyline, and to those that came and made the day what it was.

Next round is at Dowty, look forward to seeing you all.

Race Controllers Please Note;-when submitting results and to enable us to publish results in a timely manner please send as either an excel file or lapmaster results export file (PLEASE CLICK HERE TO DOWNLOAD A PDF OF “HOW TO” if you need that. Also we need to know which racers are PRO or AM and also which racers are racing in LMP 1 or 2 in both 1/32 and 1/24th scale. 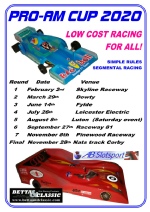